Jade's Friend and the Duct

Like a jockey on the last furlong of the Derby Jade spurred Raymond's arse with a stick as she attempted to coax him the last two hundred yards to the Duct. They'd be perfectly safe there Jade thought. Both desperately needed a rest and the Duct would provide the ideal safe-house; just as it had for Johnny all those years ago.

The two of them were coping admirably under the strain. Whenever Raymond became less than enthusiastic to continue Jade would chivy him along with a prod, and if Jade showed signs of fatigue Raymond would assist by making helpful enquiries about her spunk, or suggest her lip was insufficiently stiff. Either motivation seemed to work reasonably effectively.

A lifetime of hardship and trauma had prepared Jade well for her ordeal, just as Finchbury's stoicism and self denial classes had expertly conditioned Raymond. The "old" Finchburian was excellent at putting things in perspective, so occasionally having his bottom harpooned with a larch branch was relatively easy going compared to what his cheeks had endured at school.

Public Schools produce some remarkable stoics. Raymond's apparent indifference to danger puzzled Jade as much as it worried her. Was Raymong really not afraid? They had stopped on thier way to the "Duct" several times and each time Jade would try to impress upon her partner that they were being pursued by a wild-man. But, Raymond glibly shrugged off every dire warning with either a patronising "Steady on old girl,” or a haughty "Nonsense!" At first Jade thought Raymond was an fucking idiot for not appreciating the adversity he faced, but when he refused to flinch at Jade smearing a link of badgers turd onto the chequered lapel of his tweed jacket she realised he couldn't help it. In a funny sort of way Jade began to feel sorry for him. Raymond's defence mechanism was so ingrained that it was proving practically impossible to get through. Raymond's "auto-detachment" did have a positive side, however, in that if he ever worked for the Civil Service he would never give away state secrets, or squeal if anyone quizzed him about P.E.

It was a warm humid evening as night fell in the forest. The floor was buoyant with layer upon layer of leafy carpet, and the air was fusty. It was pretty silent under the canopy and except for the odd flutter of wings batting the delicate new branches high in the trees, and Rooks marking out their territory with their inconsiderate squawks. The night shift would take over soon.

What Jade called the "Duct" was actually the foundations of an old buried ruin, probably three hundred years old and completely obscured by a hollow glade, protected by garrison of brambles and ferns. From the surface it looked nothing more than a large foxhole, but inside was a tiny walled room. An adult couldn't stand in the "Duct", and the thick network of roots Johnny and Jade had cut away all those years ago had grown back. Nevertheless, there was enough room to crouch fairy comfortably, and at the far wall there was a space to lay and stretch their legs and urinate if necessary.

Raymond wasn't very impressed with the "Duct" as he crawled into the black hole behind Jade on all fours. He had expected something more like a youth hostel, but was too tired to care and as soon, as they were inside, Jade pushed a ball of brambles and twigs around the outside to mask the entrance and promptly went to sleep. Jade knew Denzil's men would have found the car by now, even though it had been heavily camouflaged with lettuce leaves and turnips, and she was right. The car had been unearthed a mile and a half from the Forest.
Posted by About the Author at 14:40 No comments:

The Expensive Cravat is a 60,000 word comic novel I wrote in 1993 (aged 29). The book is entirely fictional, however, any resemblance between real people and my characters is probably deliberate. 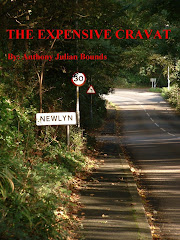 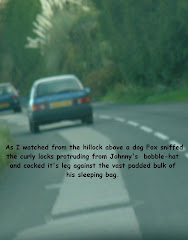 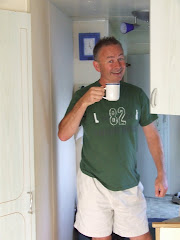 About the Author
Anthony lives in the Cornish village of Cubert just half a mile from Holywell Bay on the North East Cornish Coast. I wrote the The Expensive Cravat as alleviate my frustration with the bungling English "middle" class.